The IRC: Shaping Our Energy Future

The Role of ISOs and RTOs

Ever wonder what ISOs/RTOs actually do?

From integrating a diverse mix of power resources onto the electric grid reliably, to orchestrating the generation and transmission of electricity for two-thirds of North America, ISOs and RTOs match power generation instantaneously with demand to keep the lights on. Harnessing a commodity and then moving it at the speed of light across thousands of miles of high-voltage wires involves sophisticated coordination among utilities, energy generators and other resource suppliers, as well as consumers. The ultimate goal is to ensure access to affordable, reliable and sustainable power – made possible through efficient administration of independent and transparent wholesale energy markets. ISO and RTO innovation supports the latest advancements in smart grid technologies, improving the resiliency and reliability of the grid, making energy transmission more efficient, smarter and cost effective. 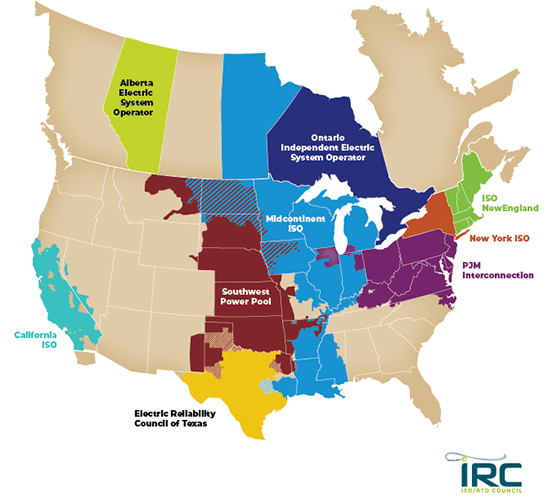 IRC members are committed to sharing ideas, fostering innovation and working together to advance the development of the North American electric grid. They also help to improve reliability and efficiency, while supporting ongoing sustainability of electric power delivery to millions of consumers throughout the continent. The IRC includes executive officers from the nine member ISOs/RTOs. Seven committees support the IRC’s goals and initiatives.

The IRC chairman rotates annually and serves as the primary point of contact as well as chief spokesperson. The IRC meets quarterly and is funded by members of the organization.

Serves as the internal and external voice of the IRC, with the goal of building awareness of the organization’s mission, sharing best practices among member ISOs/RTOs and providing communications support and counsel.

Participates in the design and development of methods, standards, and procedures for the wholesale electric market to ensure continuity and feasibility of implementation, through cooperative efforts between regulators and regional reliability organizations and the IRC, developing joint positions on reliability and business policy/standards.

Shares expertise and advice on existing information technology functions and current activities within the North American wholesale electric industry, and makes recommendations related to approaches to IT standardization and up-and-coming innovations.

Identifies areas of potential electric market standardization for ISO/RTO entities, and, as appropriate, submits recommendations to the IRC for review and approval. Communicates design ideas to the Standards Review Committee, which coordinates and builds consensus positions on policies and standards in North America.

If you have an inquiry about the IRC, please contact Communications Committee Chair Leslie Sopko (512-275-7432, leslie.sopko@ercot.com).